IMPORTANT NOTE: What follows is an inside look at the Canadian Forces Snowbirds, courtesy of a colleague of mine who goes by “Az”.

Thank you, “JWDJ!” Before we begin, here’s some quick background info. Who the heck is “Az”? I’m a safety pilot for a civilian formation aerobatic team. My piloting skills are abhorrent! Fortunately, the galaxy is kept safe by “Az” being able to train and fly with some of the best pilots in the world.

Having participated in over 100 air shows across North America spanning the last 14 years, it is my goal to share a unique perspective on aviation (by virtue of being inverted) and hopefully inspire others … especially the younger generation. So, let go!

In 2010, I had the honor of being invited to “Spring Training” with the Canadian Forces Snowbirds at Canadian Forces Base Comox, in British Columbia (BC). It started with a teammate’s telephone call asking me, “what are you doing next week?” Followed by, “do you want to go out to BC for Snowbird Spring Training?” It might have been the quickest decision I’ve ever made in my life, “heck yeah!” Today, I’d like to take you on a very short, behind the scenes look, into the world of military formation aerobatics. The Spring Training trip included experiencing a full-up demonstration profile with the Snowbirds.

We’ll focus on a few lesser known items regarding the Snowbirds … including the jet they fly, pre-flight briefing, and where the real MAGIC happens at air shows!

Revered by Their Peers 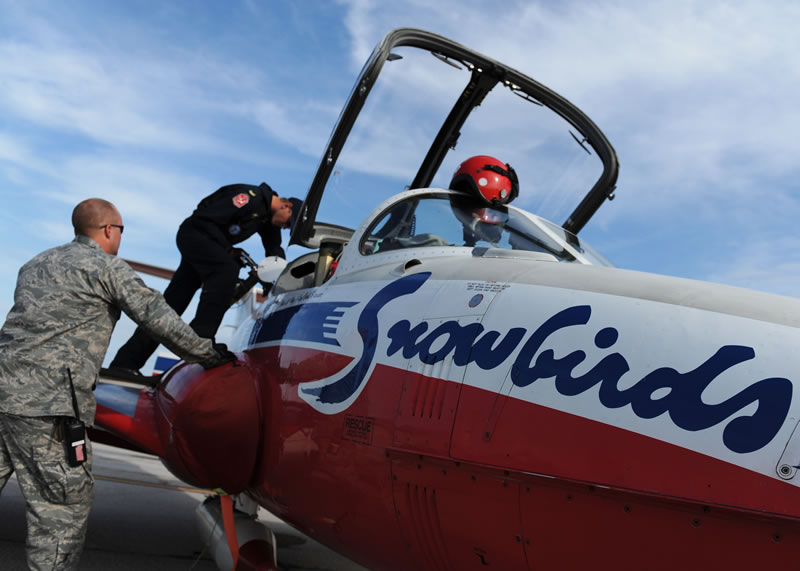 The Snowbirds have been using the same airframe, the Canadair Tutor CT-114, (jet) since 1971. Its primary purpose was as a training aircraft for the Canadian Forces. There is no sophisticated fly-by-wire flight control system, and the instrument panel is almost entirely analog (steam gauges). The jet is totally old school!

Another interesting difference, unlike the Blues and the Thunderbirds who fly with six jets, the Snowbirds fly with nine aircraft. Thus, increasing the complexity of the demonstration. The Snowbirds fly over 50 different formations, during their routine. What the Canadians accomplish with their “dated” jets is nothing short of extraordinary, just ask the Blues or Thunderbirds!

Before the team “kicks the tires and lights the fires,” they conduct a meticulous pre-flight briefing. The briefing is, “unbelievable!”

Ask most people, and they probably wouldn’t associate a military jet demonstration team with pre-visualization, choreographed hand gestures, and chanting things like, “S in Split, N in Now, … P in Pause!” If that’s not enough, throw in some positive affirmations for good measure. It’s precision flight and aviation decision making based on individual letters in a given word! All aspects of the flight are reviewed meticulously, including numerous safety contingencies.

Please check out the very cool video below for a 360 Degree look inside the Snowbirds Show Briefing (Make sure to click and move your mouse around in the video):

On this glorious day, I was flying with Captain Sean Hanson in the #6 Jet. Went you strap into the jet, you get the feeling of, “this is how cool Iron Man must feel when his armor is on.”  Breathing through the mask, the pulling the visor down, and the jet spooling up. It’s tremendously empowering and a rush of adrenaline! 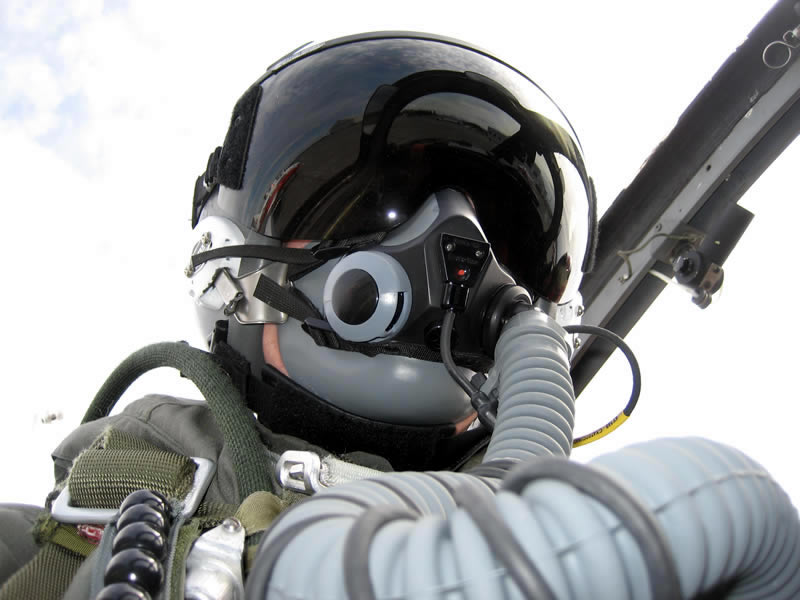 Here’s the only, and coolest, selfie I’ve ever taken in my life. There is no need to take any more!

Another interesting tidbit of information, pilots use side view and rearview mirrors. Very similar to what you use when driving a car. The mirrors help with situational awareness. 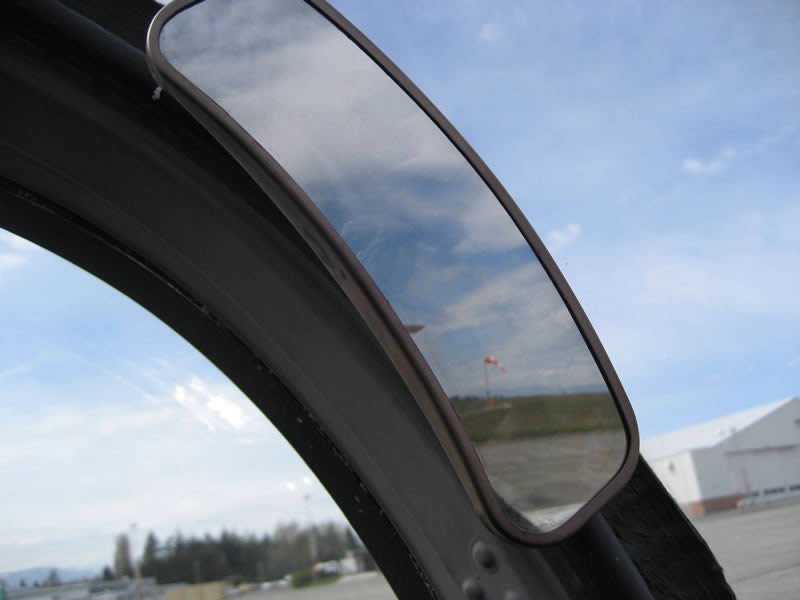 Where the Real MAGIC Happens

When most people watch an air show, they pay careful attention to what’s happening directly in front of them. It is where the visually jaw-dropping maneuvers take place.

Want to know where the real MAGIC happens on a formation aerobatic team?

It’s off-stage! (Behind the crowd and sometimes out of view.) 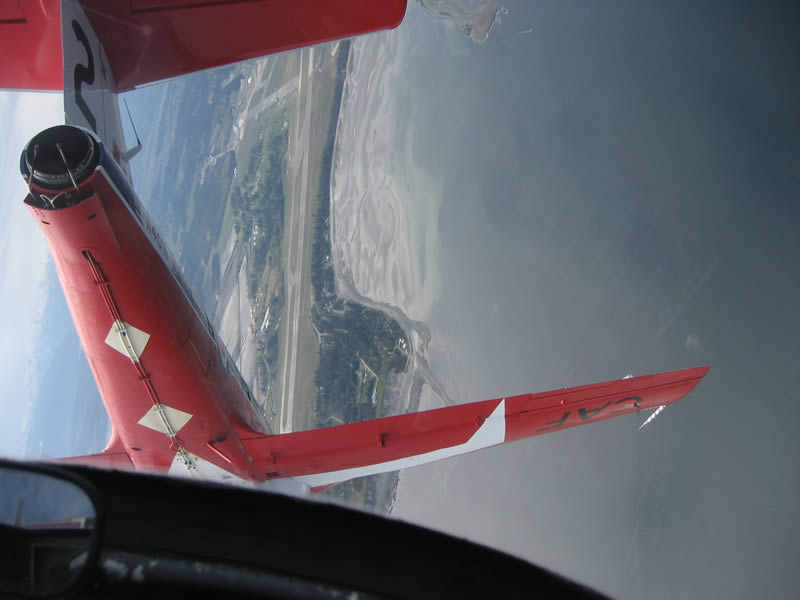 Here’s the less obvious part regarding low-level formation aerobatics. Pilots often perform some of their most arduous work when a majority of the crowd isn’t watching them!  During their time off-stage, the pilots are zipping their aircraft around, using energy management and geometry, to carefully reposition and rejoin their aircraft for the next maneuver. 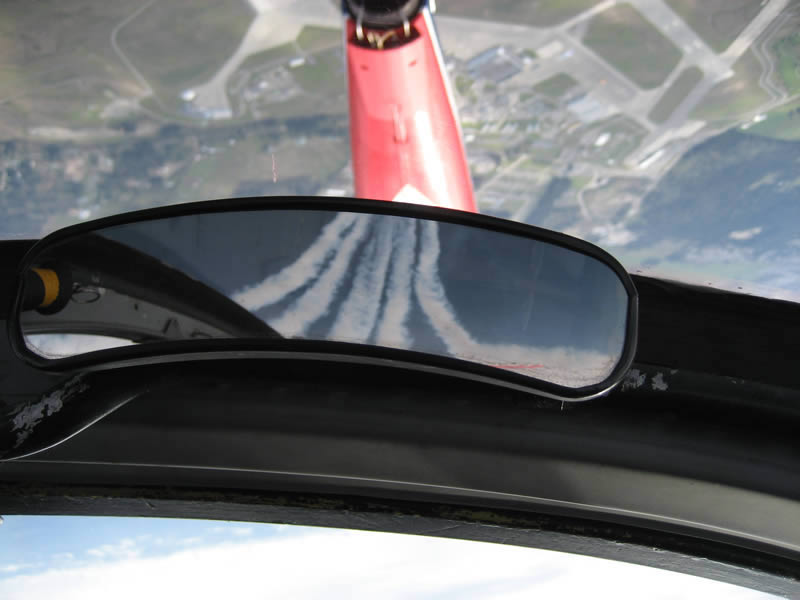 It is fascinating to watch, even on the ground. Here’s how you can witness the MAGIC yourself …

Here’s another 360 Degree look inside the Snowbirds demonstration from Toronto, Canada. It features one of those pesky “Solo” pilots. (Make sure to click and move your mouse around in the video):


For today, we’re going to leave it here. I know that it is with great respect and reverence that the CAF Wings Over Houston Airshow welcomes the Canadian Forces Snowbirds this October. Please don’t miss your opportunity to see nine-ship precision flying at its best! Plus, the Snowbirds will be joined by your United States Air Force Thunderbirds. That means you get a DOUBLE treat of AWESOME!