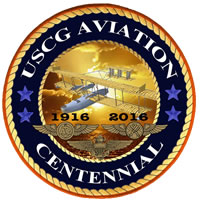 Get Up Close to the Airplanes & Meet the Aircrew

This year’s CAF Wings Over Houston Airshow features a very special ground display courtesy of U.S. Guard Guard. Coast Guard Aircrew from all over the United States are bringing their aircraft to Houston! Ground display aircraft offer a unique opportunity to meet the men and women who fly and maintain these amazing aircraft.

As “icing on the cake” . . . Some aircrew will give aircraft tours, throughout airshow weekend! 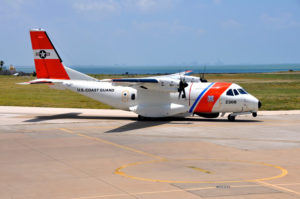 “The EADS HC-144 Ocean Sentry is a medium-range, twin-engined aircraft used by the United States Coast Guard in the search-and-rescue and maritime patrol missions. Based on the Airbus Military CN-235 it was procured as a “Medium Range Surveillance Aircraft.” The HC-144 is supplied by Airbus Group, Inc formerly EADS North America and is built in Spain by Airbus Military.

Intended to replace the Dassault HU-25 Guardian jet, the HC-144A Ocean Sentry is part of the Coast Guard’s Integrated Deepwater System Program of recapitalization and new-asset acquisition. Based on the CN-235-300 MP Persuader, the maritime patrol version of the CN-235 military transport, the HC-144 offers a longer endurance than the HU-25 it is replacing in U.S. Coast Guard service, as well as better performance in the low-level observation role.

The HC-144A has an eight-hour endurance, which makes it suited for the command and control and search and rescue roles. Its rear ramp provides for transport of standard cargo pallets. It also features short takeoff and landing capability.” 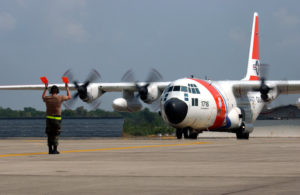 The HC-130H Hercules and HC-130J Hercules versions are operated by the United States Coast Guard in a SAR and maritime reconnaissance role.

The new HC-130J aircraft are derived from the Lockheed Martin KC-130J tanker operated by the U.S. Marine Corps. The USCG has six HC-130Js in service, but they are not capable of refueling helicopters in flight. The first delivery of this variant to the United States Coast Guard was in October 2003. They initially operated in a logistic support role until they received significant modifications, including installations of a large window on each side of the fuselage to allow crew members to visually scan the sea surface, the addition of an inverse synthetic aperture sea search radar, flare tubes, a forward-looking infrared/electro-optical sensor, a gaseous oxygen system for the crew and an enhanced communications suite. The first of these modified Coast Guard HC-130Js was delivered in March 2008.” 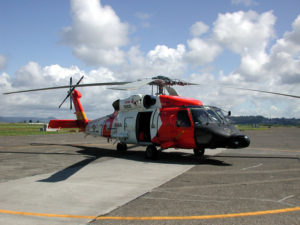 Chosen to replace the HH-3F Pelican, the MH-60T is a member of the Sikorsky S-70 family of helicopters and is based on the United States Navy’s SH-60 Seahawk helicopter. Development began in September 1986, first flight was achieved on 8 August 1989, and the first HH-60J entered USCG service in June 1990. Production ended in 1996 after 42 helicopters were produced; three retired SH-60F Seahawks were also remanufactured to MH-60T specifications beginning in 2010. A total of 42 MH-60Ts are in service with the Coast Guard. 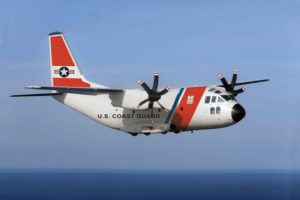 “The Alenia C-27J Spartan is a military transport aircraft developed and manufactured by Leonardo-Finmeccanica’s Aircraft Division (formerly Alenia Aermacchi until 2016).[3] It is an advanced derivative of Alenia Aeronautica’s earlier G.222 (C-27A Spartan in U.S. service), equipped with the engines and various other systems also used on the larger Lockheed Martin C-130J Super Hercules. In addition to the standard transport configuration, specialized variants of the C-27J have been developed for maritime patrol, search and rescue, C3 ISR (command, control, intelligence, surveillance and reconnaissance), fire support and electronic warfare and ground-attack missions.

In 2007, the C-27J was selected as the Joint Cargo Aircraft (JCA) for the United States military; these were produced in an international teaming arrangement under which L-3 Communications served as the prime contractor. In 2012, the United States Air Force (USAF) elected to retire the C-27J after only a short service life due to budget cuts; they were later reassigned to the U.S. Coast Guard and United States Special Operations Command. The C-27J has also been ordered by the military air units of Australia, Italy, Greece, Bulgaria, Lithuania, Mexico, Morocco, Romania, Peru, and Slovakia.”

“The Eurocopter HH-65 Dolphin is a twin-engine, single main rotor, MEDEVAC-capable search and rescue (SAR) helicopter operated by the United States Coast Guard (USCG). It is a variant of the French-built Eurocopter AS365 Dauphin. 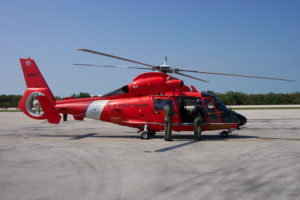 The Dolphin is primarily a Short Range Recovery (SRR) aircraft. There are now a total of 102 Dolphins in the Coast Guard Fleet. The fleet has home ports in 17 cities on the Atlantic and Pacific Ocean, Gulf of Mexico, Hawaii, and the Great Lakes region.

The Dolphin is usually deployed from shore but it can be deployed from medium and high endurance Coast Guard Cutters, as well as the Polar Icebreakers. The Dolphin’s main jobs are: search and rescue, enforcement of laws and treaties (including drug interdiction), polar ice breaking, marine environmental protection including pollution control, and military readiness.

When deployed from an icebreaker, the helicopter acts as the ship’s eyes, searching out thinner and more navigable ice channels. They also have the job of airlifting supplies to villages isolated by winter, or transporting scientists to conduct remote research.

The MH-65 is also used to patrol the Air Defense Identification Zone (ADIZ) around Washington, D.C., also known as the National Capital Region (NCR). Seven new-build MH-65Cs were acquired for this mission.”

Keep a Watchful Eye on Your Inbox!

Please remember to keep a close eye on your inbox! We’ll be sending you the MASSIVE ground display aircraft update, next week.

Have You Secured Your WINGS OVER HOUSTON Airshow Tickets Yet?

Come on out and the amazing aircraft of the United States Coast Guard!

Experience the extraordinary! In addition to the world-famous Blue Angels, we’re featuring some of the best civilian and military pilots in the world! With the Blue Angels in town, we are expecting a sell out. If you want the best airshow seats in Houston with ultimate comfort – go Eagle Squadron VIP!

Please note: Performers have flight profiles for many weather conditions. Aircraft and performances are subject to change without notice.