Here is a history lesson about our favorite Airshow venue in the world.

Every October in Houston, TX an event comes to town that makes people’s jaws drop with excitement. Aviation enthusiasts from all over the world mark their calendars and make their way to Ellington Airport for the Wings Over Houston Airshow (Oct. 29-30, 2022 **hint hint**). To some of us, it’s still hard to call it Ellington Airport – It will always be Ellington Field. To others who might be, well, just a little older, it’s Ellington Air Force Base.

The reason for so many different, but similar, names for this airfield is that Ellington Airport (or whatever you choose to call it) has a rich, 104-year old history. Ellington is as much a part of Houston history as any other place in town. We are here to tell you a little bit about what makes it so special, and why we are proud to call it the home.

“Established by the Army Air Service on 21 May 1917, Ellington Field was one of the initial World War I Army Air Service installations when aviation was in its infancy. It is named for 1st Lt. Eric Ellington, a U.S. Army aviator who was killed in a plane crash in San Diego, California in 1913. Originally created as a training facility, Ellington Airport is currently used by military, commercial, NASA aircraft and general aviation sectors. Ellington Airport is one of the few airfields built for World War I training purposes still in operation today.” 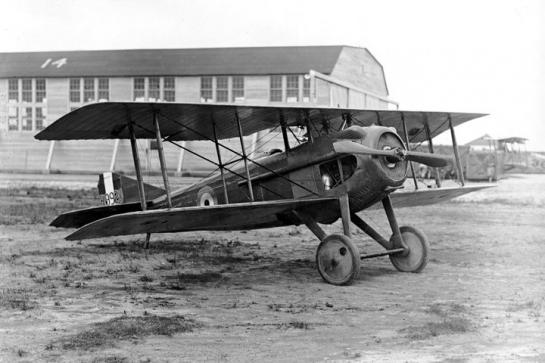 Bi-plane at Ellington Field during WWI

“The base, which consisted of a few hangars and some wooden headquarters buildings, was completed in a matter of months. By the end of 1917, the field was ready to receive its first squadron – the 120th Aero Squadron, which was transferred from Kelly Field in San Antonio, Texas, along with its Curtiss JN4 Jenny biplanes, which were shipped in wooden crates via railroad. In December, the first planes from Ellington Field flew over Houston for a benefit for the American Red Cross.”

“A flight of ten JN-4s took off from grass runways and followed the interurban tracks stretching north from Genoa to Houston. Throngs of men, women, and children watched in amazement as the JN-4s flew overhead. The roar of the aircraft was almost drowned out by the wail of sirens and factory whistles as the planes passed over. As the planes circled the city, they dropped paper flyers for the American Red Cross. Next, the formation flew to Camp Logan and then turned south toward Galveston Island. The entire flight took about an hour.” 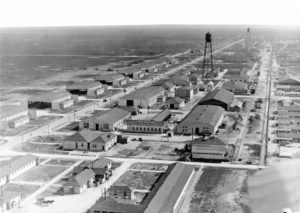 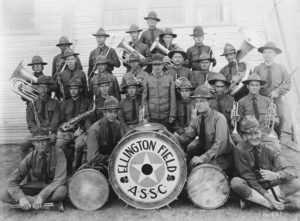 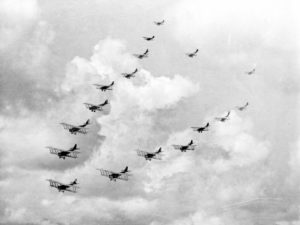 The four photos above are all from the WWI era right here at Ellington Airport. Once pre-flight and advanced training was complete, bombing instruction would take place solely at two bases – Ellington Field and Gerstner Field. If you want to see amazing photos (and armadillos!) click the link here for 100 years of Ellington in photos.

Here is a brief timeline of the history of Ellington after WWI:

1984 – The City of Houston purchases Ellington to use as a third civil airport and the first ever CAF Wings Over Houston Airshow was held in 1985.

2015 – The Houston Airport System is granted a Launch Site License from the Federal Aviation Administration, making Ellington Airport the 10th commercial spaceport in the United States

The Original “Astro-dome” – The WWII Era at Ellington Field: 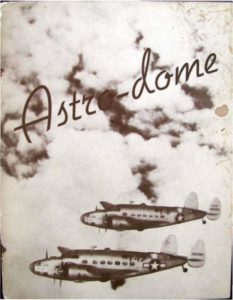 “Ellington Field was the site for advanced flight training for bomber pilots. Initial plans called for the training of 2,800 bomber pilots per year at Ellington Field or about ten percent of the total number of pilots trained throughout the United States. Beginning at five-week intervals, classes of 274 cadets entered the 10-week course. Cadets moved from the AT-6 to the more complex twin-engine AT-10 or AT-11. At that level, cadets were taught how to fly the larger multi-engine aircraft. After successful completion of the advanced training course, graduates were transferred to different airfields for more training in actual bombers.”

“Ellington Field was also a site for the USAAC, later USAAF, Bombardier School, also known as “the Bombardment Academy of the Air.” At Ellington Field, officials planned to train 4,480 bombardier cadets per year. Bombardier cadets spent most of their time during the 10-week course in the classroom learning the skills necessary to accurately drop bombs on enemy targets. Hands-on training for the bombardier cadets took place over the Gulf of Mexico. In AT-10s or AT-11s, bombardier students practiced bombing several small islands in Matagorda Bay or small target boats anchored in the bay.”

“In 1943, Ellington Field became the site for advanced navigator training when the Army Air Forces Training Command transferred the Navigator School from Mather Field, California (shout out to our friends in Sacramento!) to Houston. The USAAF Navigator School consisted of a rigorous 18-week course consisting of instruction in celestial navigation and dead reckoning. To complete the course, cadets were required to have 100 hours in navigating both local and long-range flights. By the end of 1943, more than 65 women who served in the Women’s Army Corps were also stationed at Ellington.” 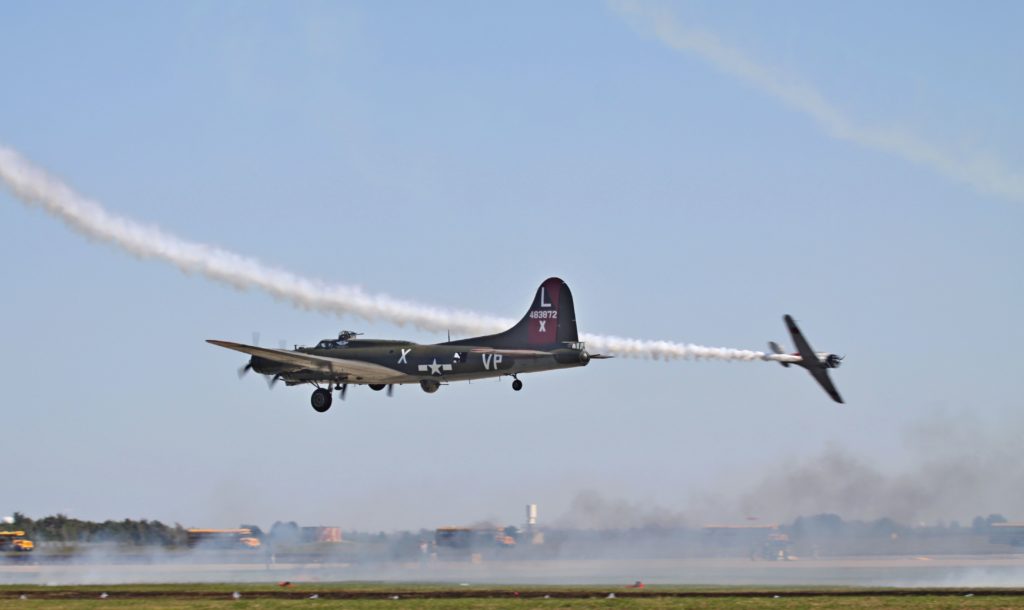 In its 104th year, Ellington Airport is now host to NASA, Lone Star Flight Museum, Ellington Field Joint Reserve Base, Spaceport, general aviation tenants and, of course, the Wings Over Houston Airshow. Along with all of that, many flight schools exist on property, making it one of the most versatile and unique airfields in the nation. 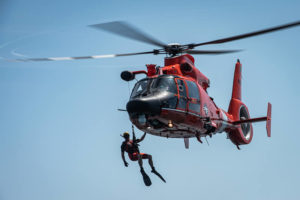 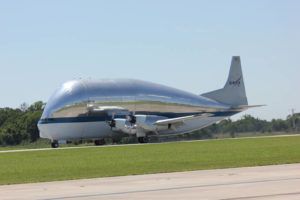 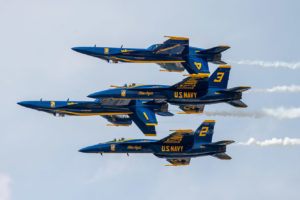 The three pictures above: Search and rescue helicopter demo from our hometown heroes with the U.S. Coast Guard Air Station Ellington, the NASA Super Guppy which resides and performs missions out of Ellington Airport, and the U.S. Navy Blue Angels performing in the F-18 Super Hornet.

So as you can see, from military service to space, and everything in between, Ellington has a proud and long history of training and serving the United States, Texas and the entire Houston community. There aren’t many places in the world that feature space exploration (NASA and the new Spaceport project), military prowess (all five branches of the military are at Ellington Field Joint Reserve Base), general aviation, and a museum to tell us all about it on property (shout out to our friends at Lone Star Flight Museum).

We are fortunate and proud to host one of the best aviation events in North America right here on such hollowed ground. With the U.S. Navy Blue Angels as our featured act in 2022, and a world of more entertainment, we are certain our 38th year will be the best yet. Mark your calendars for October 29-30, 2022. Come stand on the field that trained so many brave men and women over 100 years ago, and appreciate all that you are seeing, and standing on. Our mission is to honor the past, present and future. No field does it better than our beloved, Ellington Airport (or Field, or Air Force Base :)). We are ready! Who’s excited!?

Sign-up to Become an Insider for FREE below & SAVE on 2022 CAF WINGS OVER HOUSTON Tickets!

Our goal is to provide you the best air show experience possible at a range of price points. Ticket types include everything from an affordable day of aviation thrills for the whole family to a premium air show experience. There’s something for everyone!