This Sunday, February 20th, marks the 60th Anniversary of John Glenn’s successful orbit of the Earth (which he did 3 times!), making him the first American to accomplish such a feat. 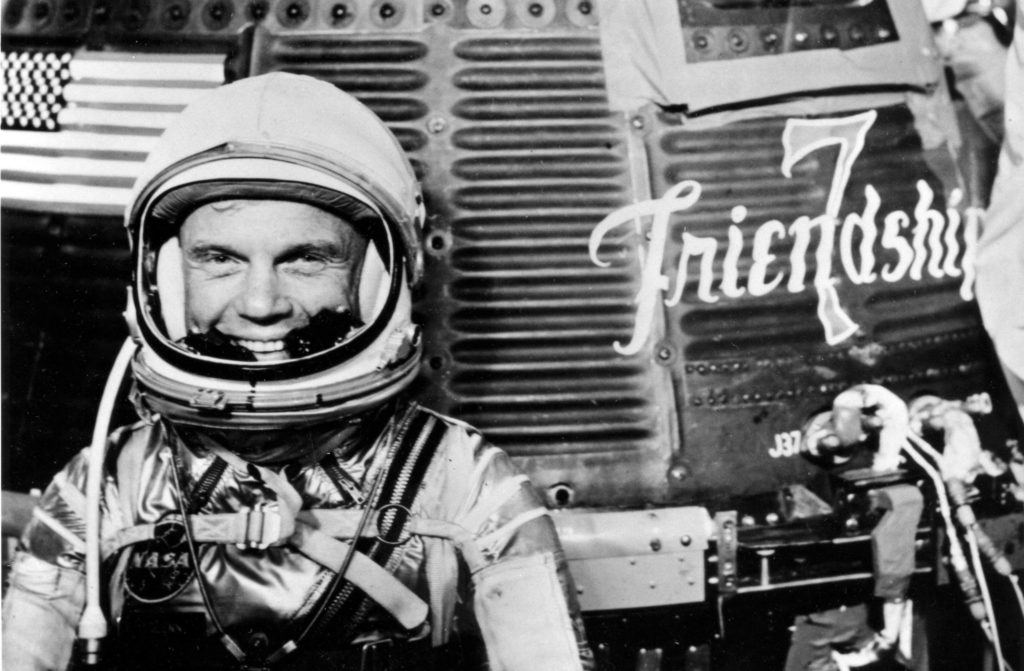 “Zero G and I feel fine. Capsule is turning around. Oh, that view is tremendous.” – John Glenn

February 20, 1962 was a day of massive success for NASA and the United States in the “space race” that was taking place at the time with the Soviet Union.

“John Glenn, a lieutenant colonel in the U.S. Marine Corps, was among the seven men chosen by the National Aeronautics and Space Administration (NASA) in 1959 to become America’s first astronauts. A decorated pilot, he flew nearly 150 combat missions during World War II and the Korean War. In 1957, he made the first nonstop supersonic flight across the United States, flying from Los Angeles to New York in three hours and 23 minutes.” And on Feb. 20, 1962 Glenn would be the first American to orbit the earth.”

“An Atlas launch vehicle propelled a Mercury spacecraft into Earth orbit and enabled Glenn to circle Earth three times. The flight lasted a total of 4 hours, 55 minutes, and 23 seconds before the Friendship 7 spacecraft splashed down in the ocean. Most major systems worked smoothly, and the flight was a great success as an engineering feat.

Glenn lifted off from the launch pad at Cape Canaveral at 9:47 a.m. on February 20, 1962. Some 100,000 spectators watched on the ground nearby and millions more saw it on television. After separating from its launching rocket, the bell-shaped Friendship 7 capsule entered into an orbit around Earth at a speed of about 17,500 miles per hour. Smoothing into orbit, Glenn radioed back, “Capsule is turning around. Oh, that view is tremendous.” John Glenn boards the Friendship 7 capsule to become the first American to orbit the earth, during the Mercury-Atlas 6) mission, on Feb. 20, 1962. A temporary handle bolted to the outside of the spacecraft made the clumsy maneuver a little easier. Photo credit: NASA/Space Frontiers/Getty Images/Time

The Friendship 7 Mission: A Major Achievement and a Sign of More to Come

“This Mercury-Atlas (MA) 6 mission also reestablished NASA and the U.S. as a strong contender in the space race with the Soviet Union. The Soviet Union had launched the world’s first spacecraft, Sputnik, in October 1957 and had also sent the first human, Yuri Gagarin, into space on April 1961. NASA responded by sending the first American, Alan Shepard, into space in May 1961, but Shepard’s flight was only a suborbital lob, whereas Gagarin had orbited Earth. With Glenn’s orbital mission, NASA was finally able to pull back even with the Soviets.

The flight was the culmination of a tremendous amount of work in a relatively short time. On October 7, 1958, the newly formed NASA had announced Project Mercury, its first major undertaking. The objectives were threefold: to place a piloted spacecraft into orbital flight around Earth, observe human performance in such conditions, and recover the human and the spacecraft safely. Despite Shepard’s successful first flight, many questions had still remained about how Americans could survive and function in space.

The success of the Friendship 7 mission enabled NASA to accelerate further its efforts with Project Mercury. During less than five years, from Mercury’s start to finish, more than two million people from government and industry pooled their skills and experience to produce and manage the Nation’s first six piloted spaceflights. Mercury flights demonstrated that people could survive in microgravity for over a day without deterioration of normal physiological functions.

Mercury also set the stage for Projects Gemini and Apollo during the 1960s and all later U.S. human spaceflight activities. Thus, the MA-6 mission of Friendship 7 was both a capstone event and the beginning of many more achievements in human spaceflight for NASA.”

Check out this video all about John Glenn’s historic day and some of the difficulties he and the people in Mission Control had to overcome. Added bonus: Houston’s very own and NASA hero, Eugene Kranz, is interviewed!


So when you look to the skies this Sunday, Feb. 20th, remember the bravery of John Glenn and the thousands of people at NASA who helped make the “going to space” dream a reality. Just think of how far we have come and where we are going. The sky truly isn’t the limit (because we went to space)!