Me-262 to Fly at Wings Over Houston

Me-262 to Fly at Wings Over Houston

“The first operational jet fighter, Messerschmitt’s Me 262 started as Projekt 1065 in 1939. Competing with Ernst Heinkel’s experimental He-280, the Me 262 was selected because it was designed for the Junkers Jumo 003 axial-flow engine. Nicknamed Schwalbe (Swallow), the Me 262 first took to the air in April 1941, powered by a piston engine. Jumo 004-powered Me 262s appeared in 1943, and were in production by April 1944. The model on display at the National Naval Aviation Museum, “White 35,” was captured in Schleswig, Germany in 1945. Captured jets such as this were critical to the development of new, advanced U.S. fighters in the early Cold War. 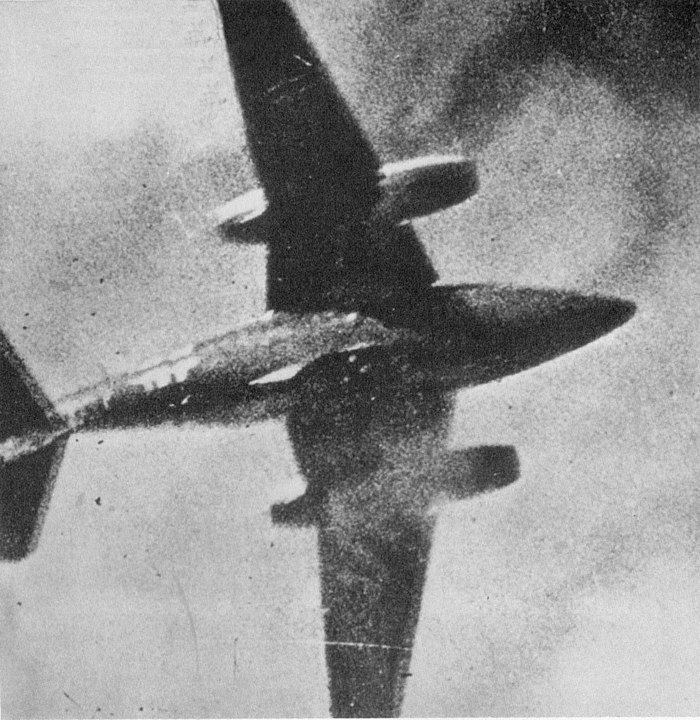 The Me 262 began as Messerschmitt’s Projekt 1065 in 1939, the design of a jet aircraft by the company following Ernst Heinkel’s flight in his He-178, the first aircraft to fly under turbojet power. Though the German government favored the Messerschmitt design, the project suffered at the hands of Hermann Göring, head of the Luftwaffe, who cut expenditures for jet engine research.

The 262’s first flight took place in April 1941, but due to lagging engine development the aircraft was powered by one piston engine in the nose. At the time, the German view held that the war could be won using conventional, piston-powered aircraft. Thus, what could have placed Germany in a position of advantage in the air war was squandered as the program languished until July 1942, when the first “jet” flight was made. Test flights continued through 1942 and 1943, with numerous changes made to the airframe, notably adoption of tricycle landing gear. By mid-1943, airframe modifications had been completed, but there still were delays in engine manufacture and reliability. Messerschmitt finally settled on the employment of the Junkers Jumo 004. 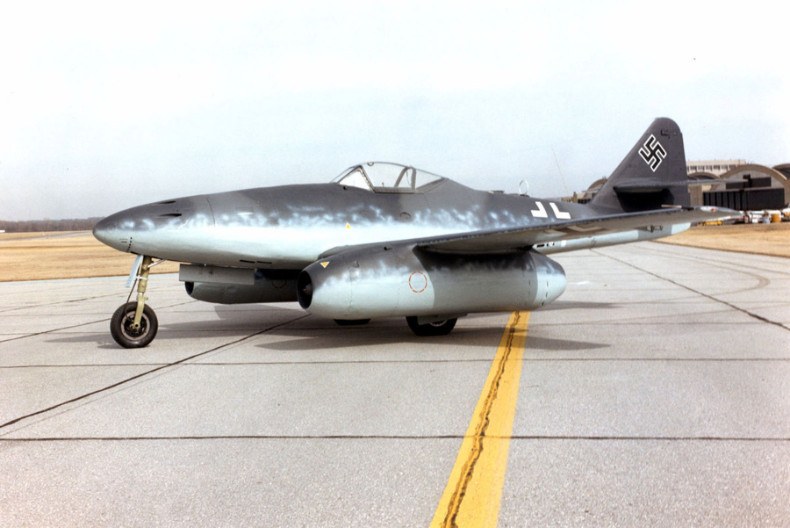 Production began in 1944, with only 107 aircraft delivered by August of that year. Major delays were encountered due to lack of engines, shortages of strategic materials (especially metal and alloys that could stand high temperatures of jet engines), and the dislocation of German industry by ever increasing Allied bombing. Operational missions began in August 1944, with German pilots claiming the downing of 19 Allied aircraft for the loss of only six Me 262s.

Through 1943 and 1944, Hitler assigned priority in Me 262 construction and employment to bombing, pushing his Schnellbomber over the fighter mission, despite the objections from fighter command. Finally, in January 1945, Jagdgeschwader 7 (JG 7) was formed, followed by Lieutenant General Adolf Galland’s Jadgverband 44. Though only of squadron size, Galland’s unit was comprised of many of the Luftwaffe’s top aces.

By March 1945, fighter missions concentrated on Allied bomber formations. On 18 March 1945, Me 262s tore into a U.S. bomber formation, downing 12 bombers to the loss of just three jets. Despite its short time in combat, the Me 262 had proven superior to all Allied fighters, accounting for 542 Allied aircraft destroyed while losing 100. On display is a two-seat Me 262 B-1a.” 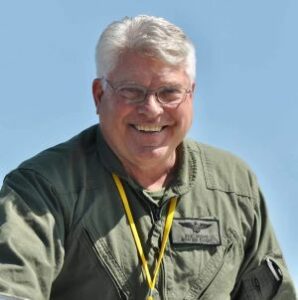 Here’s a little more about pilot Rick Sharpe, who will be flying the Me-262 this weekend …

“Over thirty years of aviation operations, maintenance, and management experience within the Oil and Gas Industry, both onshore and offshore. Specialized knowledge includes: Project Management, Resource Management, Procurement set up and configuration, Document and Data Management, fixed wing and rotorcraft operations and rotorcraft external load operations. Long term experience with Flight departments from procurement and startup to shut down and disposition. Above average skills in management, leadership of team and personnel as well as day-to-day department administration.

DON’T MISS THE ACTION & FUN, PURCHASE YOUR TICKETS TODAY:
Please note: Your Insider ONLY discount is automatically applied to any tickets you select during the checkout process. The prices you see in the cart are the INSIDER ONLY discounted prices.