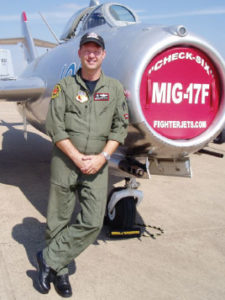 Randy W. Ball / MiG Pilot, is North America’s Premier Jet Demonstration Pilot. Randy has performed well over 1,000 demonstrations to date! No other North American Jet Demo pilot even comes close to that number of performances. In fact, Randy is the only Jet Demo pilot (military or civilian) to be granted both a day and night unlimited aerobatic rating in jet fighters by the FAA. He has flown over 42 different types of aircraft, manufactured in nine countries.

Come out to the 2017 CAF Wings Over Houston Airshow on October 21 & 22 and watch Randy demonstrate afterburner passes and 8g turns during his MiG-17 demonstration!

The MiG-17F was a very nimble fighter that could prove deadly unless respected when engaged by pilots with superior training and tactics such as those used by the U.S. Navy and Air Force. One moment’s complacency when fighting against the MiG-17F could prove fatal. It was flown more than 20 countries, three of which still fly it. Because of its famous heritage and great maneuverability, it makes one of the best air show jets in the world, able to stay in front of the fans while still flying at great speeds.

This Mig-17 will also fly a solo routine and also in the Vietnam re-enactment as an enemy of the US Forces.

Special Access Link – Have You Secured Your Up to 25% OFF Tickets Yet?