An iconic piece of history will be featured at the 2018 CAF Wings Over Houston Airshow! Come out and get up close to one of the first aircraft to carry troops into the battle of Normandy during World War II. Not only will you be able to get up close to this amazing aircraft, but you will also be able to tour inside for a small fee. Proceeds raised by That’s All, Brother at the 2018 Airshow will go towards returning the aircraft to Normandy for the 75th Anniversary of D-Day.

“Nearly 75 years ago, on June 6, 1944, That’s All Brother carried the first of the paratroopers from the 101st and 82nd Airborne divisions. Piloted by Lt. Col John Donalson, the plane led over 800 C-47s which dropped over 13,000 paratroopers into a battle that changed the course of mankind. Our mission is to bring this great airplane back to the skies over Normandy for the commemoration of the 75th anniversary of D-Day.” 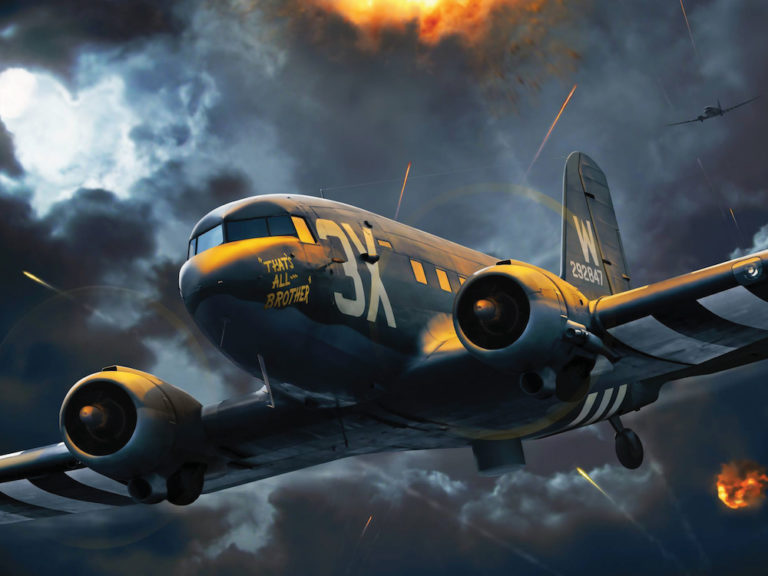 “As part of the Commemorative Air Force (CAF) Central Texas Wing, That’s All Brother is collaborating with three other CAF C-47/DC-3 airplanes to make the epic journey back over the Atlantic in 2019. We will be retracing the classic ferry path from the United States to Canada, Greenland, Iceland, Scotland, and England to join up with over 30 C-47/DC-3 airplanes in Duxford, England as part of the Daks over Normandy project. From there, we will travel to Normandy for the 75th anniversary, then to Germany to commemorate the 70th anniversary of the Berlin Airlift.”

“After serving in Operations Market Garden, Repulse, and Varsity, the airplane returned to the United States and was sold to the civilian market in 1945. During the course of many owners over the next several decades, the historical significance of the airplane was lost and it was eventually sold to be scrapped. Luckily, a historian from the United States Air Force discovered that this historic airplane was lying in a boneyard in Wisconsin. The Commemorative Air Force was able to acquire the airplane, and through a large group of donors and volunteers, restore the airplane to flying status.

Our restoration effort continues with restoring the exterior finish of the plane to its D-Day paint scheme, as well as countless interior details including the navigator and radio operator stations. The CAF maintains airplanes to be artifacts of living history, and we will be able to offer rides in That’s All, Brother later in 2018.”