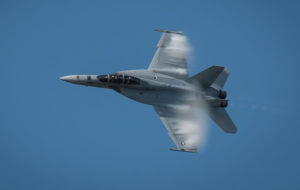 CAF Wings Over Houston 2017 is proud to host VFA-122 and their “Super” Hornet Tactical Demonstration! Come out, October 21 & 22, and experience the full-tilt capabilities of this extraordinary aircraft. The use of Maximum-Afterburner will leave you slack-jawed as the skies above Houston come alive with freedom’s roar! Absolutely nothing beats watching this mesmerizing show on-site. Get the Inside Scoop and check out the video below!

Thursday, June 15th at 12:00 PM (Noon) Central Time is our Father’s Day (Super-Deep Discount) Ticket launch. This launch is your single best opportunity to get 2017 Wings Over Houston Airshow tickets at up to 50% OFF! On that day you will receive a special email and Insider-only link to purchase discount tickets. Please note, the number of deeply discounted tickets are limited and for Insiders ONLY. Keep a watchful eye on your inbox for additional launch details. After launch or after the limited ticket blocks are sold, tickets will go on sale to the public at a higher price. Deeply discounted air show tickets make a GREAT gift for dad – don’t miss this special opportunity to SAVE!

Now about that “Super” Hornet Demo …

“Air shows are the best place to see a VFA-122 Super Hornet in action. The Tactical Demonstration, or “Tac Demo” team flies the single-seat F/A-18E and two-seat F/A-18F as close to the “edge of the envelope” as safety and prudence allow. The routine highlights the Rhino’s maneuverability and slow-speed handling characteristics and has been very well received around the country.”

“The Boeing F/A-18E and F/A-18F Super Hornet are twin-engine carrier-capable multirole fighter aircraft variants based on the McDonnell Douglas F/A-18 Hornet. The F/A-18E single-seat and F/A-18F tandem-seat variants are larger and more advanced derivatives of the F/A-18C and D Hornet. The Super Hornet has an internal 20 mm M61 rotary cannon and can carry air-to-air missiles and air-to-surface weapons. Additional fuel can be carried in up to five external fuel tanks, and the aircraft can be configured as an airborne tanker by adding an external air refueling system.

Designed and initially produced by McDonnell Douglas, the Super Hornet first flew in 1995. Full-rate production began in September 1997, after the merger of McDonnell Douglas and Boeing the previous month. The Super Hornet entered service with the United States Navy in 1999, replacing the Grumman F-14 Tomcat, which was retired in 2006; the Super Hornet serves alongside the original Hornet. The Royal Australian Air Force (RAAF), which has operated the F/A-18A as its main fighter since 1984, ordered the F/A-18F in 2007 to replace its aging F-111C fleet. RAAF Super Hornets entered service in December 2010.” 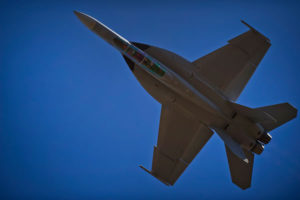 “Larger than the Legacy Hornet, the FA-18E/F represents the 21st Century’s first truly multi-role fighter. Using the lessons learned from the original Hornet, the “Rhino” brings advances in avionics, weapons capabilities, radar and sensors, and stealth technology. Having stepped up to fill the roles of the F-14 Tomcat, S-3 Viking and older FA-18’s, the Rhino not only carries combat ordnance but can provide valuable reconnaissance and air-to-air refueling support to the US Fleet.

After entering service with the Fleet, the Rhino quickly found itself in combat in the skies over Afghanistan and Iraq. Its increased fuel and ordnance carriage make the Rhino an asset to American combat operations around the world. With the capability for future growth in weapons and on-board systems, the Rhino will remain a credible strike-fighter for years to come.

“The Flying Eagles are proud to showcase the FA-18 to audiences around the world. The “Demo” is designed to highlight the mobility, versatility, and power of the FA-18 for the citizens who look to the Navy for the defense of freedom. From the high “G” minimum radius turn to the slow speed “high-alpha” pass, the Demo flight puts the Rhino through its paces.

Each maneuver is meticulously rehearsed by Demo Team aircrew, first in the simulator, then in a series of qualification and practice flights. Demo aircrew are Fleet veterans, chosen for their abilities, knowledge, and experience. Throughout the show, adherence to procedure and the safety of observers are paramount. Although the maneuvers are dynamic, Demo team members adhere to guidelines established by VFA-122, the Navy, and the FAA to ensure their safety and that of the local community.”

Become a Wings Over Houston Airshow Insider™ and SAVE up to 50% OFF AIRSHOW TICKETS!

As an AIRSHOW Insider You Get:

*We value and respect your privacy! Please read our Privacy Policy. We will never share, sell, or rent your info. By submitting above you are giving WingsOverHoustom.com express written permission to send you additional information. You may unsubscribe at any time.