One of the largest military aircraft in the world is headed to the 2022 Wings Over Houston Airshow! It will be joined by it’s younger and nimbler sibling … both move a lot of essential equipment and personnel around the globe!

Thanks to our friends in the U.S. Air Force we’re proud to announce that the C-5M Super Galaxy and C-17 Globemaster III (the younger nimble one) will be on ground display at this year’s show. You need to come out to the show and see these marvels of aviation engineering. The fact that something so massive (and HEAVY) can fly is astonishing. 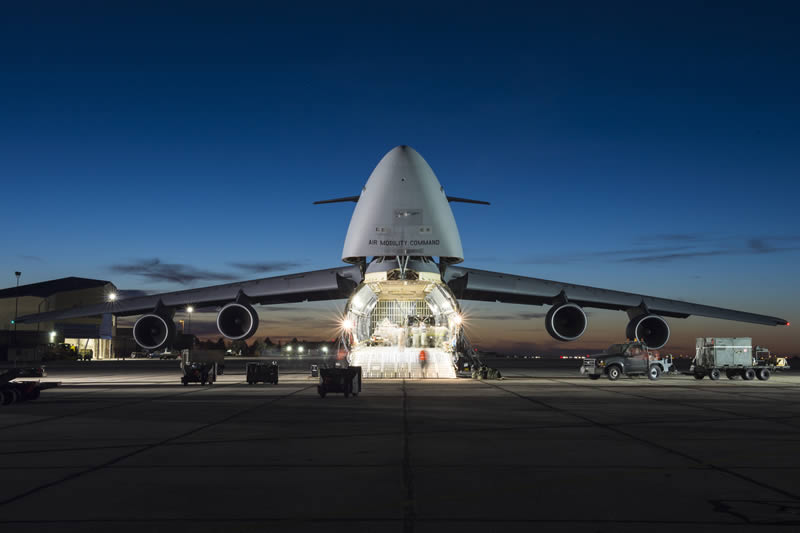 C-5 Mission
The C-5 Galaxy is one of the largest aircraft in the world and the largest airlifter in the Air Force inventory. The aircraft can carry a fully equipped combat-ready military unit to any point in the world on short notice and then provide the supplies required to help sustain the fighting force.

C-5 Features
The C-5 has a greater capacity than any other airlifter. It has the ability to carry 36 standard pallets and 81 troops simultaneously. The Galaxy is also capable of carrying any of the Army’s air-transportable combat equipment, including such bulky items as the 74-ton mobile scissors bridge. It can also carry outsize and oversize cargo over intercontinental ranges and can take off or land in relatively short distances. Ground crews are able to load and off-load the C-5 simultaneously at the front and rear cargo openings, reducing cargo transfer times. 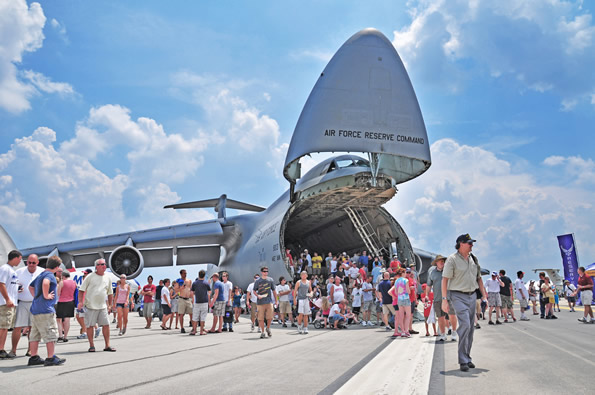 Other features of the C-5 are:

– Able to operate on runways 6,000 feet long (1,829 meters)
– Five sets of landing gear totaling 28 wheels to distribute weight
– Nose and aft doors that open the full width and height of the cargo compartment to permit faster and easier loading
– A “kneeling” landing gear system that permits lowering the parked aircraft to facilitate drive-on/drive-off vehicle loading and adjusts the cargo floor to standard truck-bed height
– Full-width drive-on ramps at each end for loading double rows of vehicles
– A maintenance diagnostics system that records and analyzes data from more than 800 (C-5A) and 7000 (C-5M) test points, reducing maintenance/repair time.

***Stay tuned for a follow-up email about what and WHO the crew of the C-5M Super Galaxy will be bringing with them to the wings over houston Airshow. You won’t want to miss it!*** 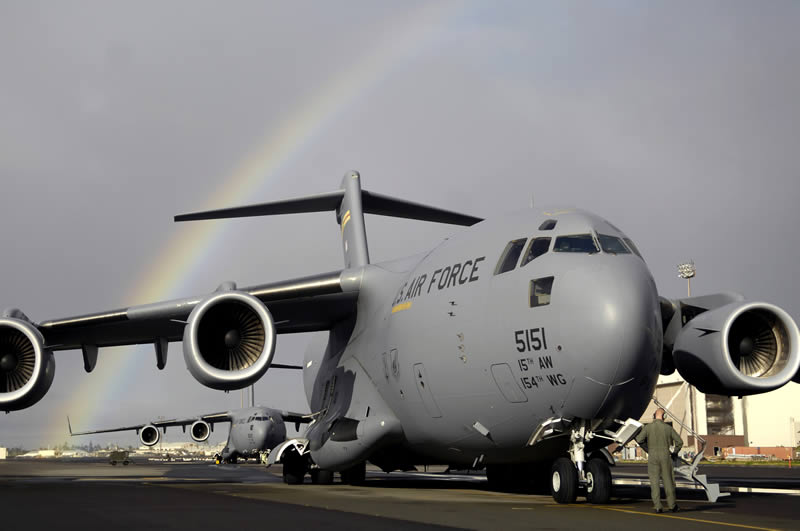 C-17 Mission
The C-17 Globemaster III is the most flexible cargo aircraft to enter the airlift force. The C-17 is capable of rapid strategic delivery of troops and all types of cargo to main operating bases or directly to forward bases in the deployment area. The aircraft can perform tactical airlift and airdrop missions and can transport litters and ambulatory patients during aeromedical evacuations. The inherent flexibility and performance of the C-17 force improve the ability of the total airlift system to fulfill the worldwide air mobility requirements of the United States.

The ultimate measure of airlift effectiveness is the ability to rapidly project and sustain an effective combat force close to a potential battle area. Threats to U.S. interests have changed in recent years, and the size and weight of U.S.-mechanized firepower and equipment have grown in response to improved capabilities of potential adversaries. This trend has significantly increased air mobility requirements, particularly in the area of large or heavy outsize cargo. As a result, newer and more flexible airlift aircraft are needed to meet potential armed contingencies, peacekeeping or humanitarian missions worldwide. The C-17 is capable of meeting today’s demanding airlift missions. 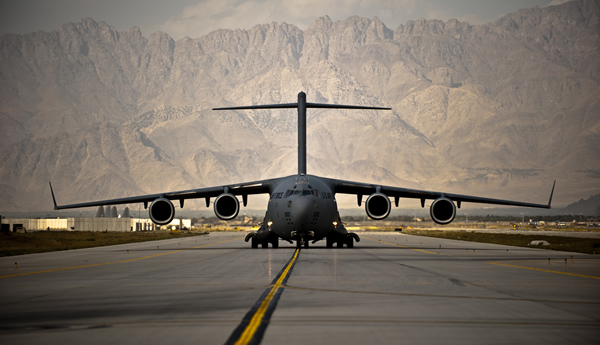 C-17 Features
Reliability and maintainability are two outstanding benefits of the C-17 system. Current operational requirements impose demanding reliability and maintainability. These requirements include an aircraft mission completion success probability rate of 92 percent, only 20 aircraft maintenance man-hours per flying hour, and full and partial mission availability rates of 74.7 and 82.5 percent, respectively. The Boeing warranty assures these figures will be met.

The C-17 measures 174 feet long (53 meters) with a wingspan of 169 feet, 10 inches (51.75 meters). The aircraft is powered by four Pratt & Whitney F117-PW-100 turbofan engines, which are based on the commercial Pratt and Whitney PW2040 used on the Boeing 757. Each engine is rated at 40,440 pounds of thrust and includes thrust reversers that direct the flow of air upward and forward to avoid ingestion of dust and debris. Additionally, thrust reversers provide enough thrust to reverse the aircraft while taxing backwards and create in-flight drag for maximum rate descents. The design characteristics give it the capability to operate into and out of short runways and austere airfields carrying large payloads. Maximum use has been made of commercial off-the-shelf equipment, including Air Force-standardized avionics.

Be sure to come out to the Airshow IN OCTOBER and meet the men and women
who fly and maintain these extraordinary machines!