A (“Hometown”) Inside Look at the 2017 United States Air Force Thunderbirds! 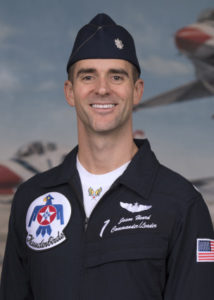 It’s not often that you get a home town hero at the airshow. Thus, 2017 is very special. It’s made even better when the home town hero is Lead Pilot for the USAF Thunderbirds. Check out the video below for an inside look at the United States Air Force Thunderbirds presented by Lt. Col. Jason Heard.

“Lt. Col. Jason Heard is the Commander/Leader of the U.S. Air Force Air Demonstration Squadron. In addition to flying the No. 1 jet and leading all air demonstrations, he commands the 120-person squadron. Colonel Heard earned his commission in 1999 as a graduate of the University of Texas at Austin. Initially, Lt. Col. Heard was an F-15E Weapons Systems Operator prior to attending pilot training. He subsequently served in F-15E squadrons as an instructor pilot and evaluator. Prior to joining the Thunderbirds, he led an F-15E squadron in combat as an expeditionary squadron commander. He has logged more than 3,000 flight hours with 788 hours of combat experience. Colonel Heard is in his first season with the team and hails from Sugarland, TX.”

The USAF Thunderbirds will ROAR over the CAF Wings Over Houston Airshow on October 21 & 22. Come out to the show and witness something spectacular!

Here’s Your Inside Look at the USAF Thunderbirds … (Just press the Play Button, Below!)