“The RE/MAX Skydiving Team to OPEN the 2021 Wings Over Houston Airshow!” 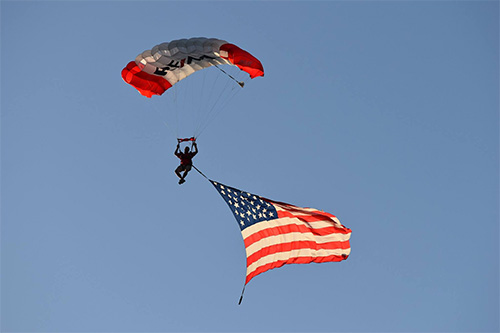 The Official Open to Wings Over Houston 2021!

The RE/MAX Skydiving Team is delivering it’s show-stopping performance to thousands of Texans this fall at some of our region’s grandest outdoor event venues. This year, the team will officially open the 2021 Wings Over Houston Airshow, October 9 & 10, with a skydive choreographed to the National Anthem. 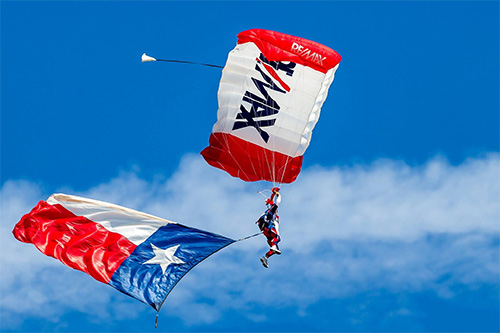 According to RE/MAX of Texas, between the four jumpers, they have more than 100 years of jump experience and more than 15,000 jumps. These experienced jumpers will leap from a plane at 4,500 feet and experience a 120mph free fall. You can easily find these jumpers in the air by looking for Texan and American flags flying down with them.

“Two of us will have red, white and blue streamers as we come in,” RE/MAX Skydiving Team member Jeff Smith said. “The third will have the Texas flag, and the last jumper will have the American flag.”

Smith joined the RE/MAX team 13 years ago but has been parachuting since 1974. 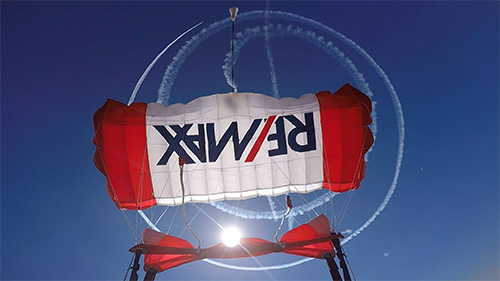 The RE/MAX Skydiving Team Started at the Wings Over Houston Air Show!

“There was a Wings Over Houston air show where another jump team was supposed to parachute in but had to cancel for some reason,” Al Saylor said. Saylor has been with the team for more than 20 years.  “RE/MAX sponsored that show and thought something needed to be done. So they had custom chutes made, got the team together for the Houston show, and that’s how we got started. From there it just grew. We’ve participated in NASCAR, pro football, air shows, you name it events. From Texas Motor Speedway to Arrowhead Stadium in Kansas City to the Cleburne Regional Airport, leaping from a plane at 4,500 feet into a 120 mph free fall is always a thrill,” Smith said.

“We’re ambassadors of the sport of skydiving and representing RE/MAX,” Smith said. “RE/MAX is very engaged in aviation promotion. Besides the skydiving team they sponsor three hot air balloons in Texas and so, we as a team, have jumped from planes and balloons.”

Mainly, Smith and Saylor said, jumping out of planes is a blast.

“It is,” Smith said. “And then the interaction with the crowds is really what we’re all about. People look forward to seeing the parachutes. They want to come up to talk to us, get autographs, especially the kids and it’s great the be part of that.”

Sign-up to Become an Insider for FREE below & SAVE on 2021 CAF WINGS OVER HOUSTON Airshow Tickets!